Jesse Ray & The Carolina Catfish and Via Mardot swelled a large crowd for this week’s edition of the Tuesday series at Meijer Gardens, demonstrating the power of local and regional music.

EDITOR’S NOTE: For over 15 years, the Tuesday Evening Music Club hosted by Ralston Bowles at the Frederik Meijer Gardens & Sculpture Park has provided a unique opportunity for local and regional artists to wow crowds on the same stage where big international stars perform. The unique, family atmosphere draws over 2,000 people in good weather and this week’s show was no exception. Local Spins writer Parker Learman-Blaauw recapped the scene in words and photos.

Support our coverage of
The West Michigan Music Scene

Tuesday evening, the amphitheater of Frederik Meijer Gardens and Sculpture Park looked like something from a movie.

The venue resonated with the deep bass of Michigan based retro-pop styles Via Mardot.

In the middle of a crowded amphitheater, the setting sun on the horizon gave the whole scene a brilliant orange glow.

“We’re happy to be back in Grand Rapids,” band singer Olivia Mainville told the crowd, who responded with exuberant cheers.

The group – specializing in a kind of pop music dating back to the ’60s, with stacked instruments that would sound at home in a foggy, smoky cocktail bar or club in a Martin Scorsese film – played their most recent single, ” Stocks ”, as well as the preview of several unreleased songs that have yet to be named.

These included “a new song that we recorded in LA and will be releasing very soon,” with a melody of soaring guitar riffs, Mainville revealed. 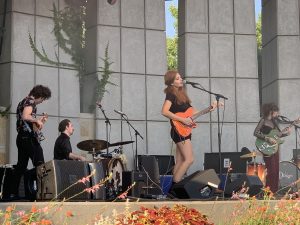 After a brief intermission, it was time for the two-man rockabilly powerhouse of Grand Rapids to take the stage to the thunderous applause of audiences of all ages.

Jesse Ray and Caroline’s Catfish launched in a performance of eight consecutive songs, which even more excited the crowd already engaged. The entire dance section in front of the stage quickly filled with fans grooving to upbeat blues-rock.

For some of the Tuesday Evening Music Club regulars in attendance, this week’s show had a special appeal.

Jesse Ray and the Carolina Catfish having “a good old-school sound that you don’t hear anymore,” said Mairen Sitski, 44, of East Grand Rapids, who frequently attends Meijer Gardens shows with her husband.

The family atmosphere of the July and August shows extends even beyond the stage performances, with an “Instrument Petting Zoo” hosted by Meyer Music where spectators can interact with a variety of musical tools they see and see. hear at concerts.

Other upcoming shows include Cameron Blake and Patty PerShayla August 10, Pajamas and Charlie Millard Band August 17, Ralston Bowles and his friends August 24, and Ballet of the Grands Rapides August 31.

Doors open at 5 p.m. and all Meijer Gardens are open to guests during these shows. Get more details online here.

Entry to the Tuesday Evening Music Club is free for Meijer Gardens members or the regular entry fee for non-members: $ 14.50 for adults, $ 11 for seniors and students, $ 7 for children 5 to 13, $ 4 for children 3 to 4 and free for children 2 and under.