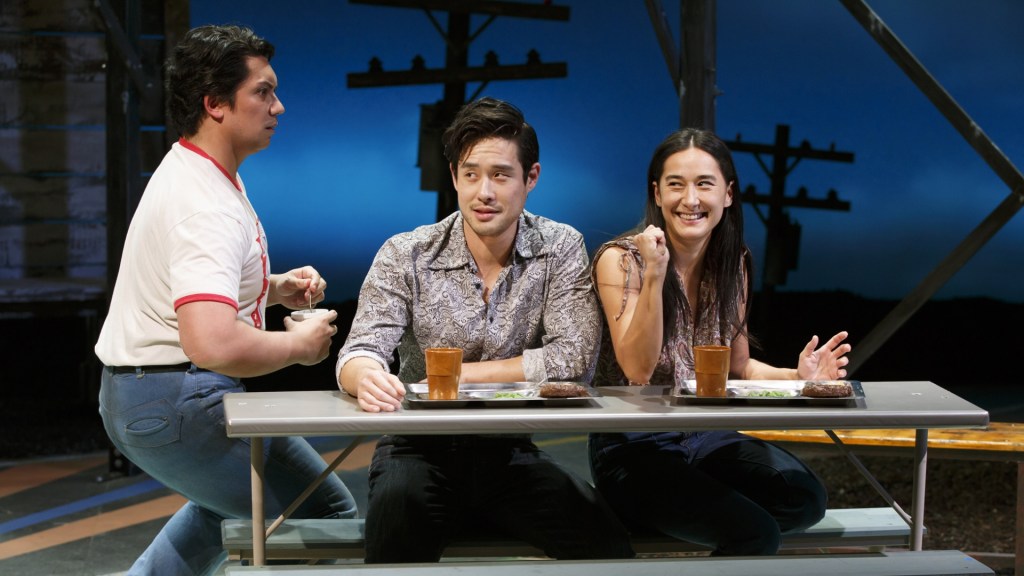 Qui Nguyen’s biographical play, “Vietgone,” is a clever variation on what a colleague called the play “My Life Until Now”. Instead of being a tribute to the wonderful Me for the miracle of being Me, the Manhattan Theater Club play is a quirky, loving and often funny tribute to the playwright’s parents, who met in an American refugee camp after emigrated here after the fall of Saigon. .

Nguyen, from the downtown geek culture celebrated by this troupe of Vampire Cowboys, shows here that he’s also comfortable working in more traditional theatrical forms. In what feels like working closely with its director, May Adrales, the writer effectively uses a fluid episodic structure to cover the course of her parents’ lives from the time they left Vietnam for America.

A Vietnamese helicopter pilot named Quang Nguyen (Raymond Lee, a prominent man) manages to transport civilians out of Saigon as the city plummets. But he is unable to return for his own wife and children, and it will always haunt him. As he swears to his friend and traveling companion, Nhan Khue (the rugged Jon Hoche), as soon as they reach California, they will catch a plane to Guam and take the first boat back to Saigon.

“We don’t belong here,” Quang said. “We belong to it. There we are heroes. We are sons. We are men. Meanwhile, the friends are stuck in set designer Tim Mackabee’s surreal vision of America, a land of looping highway ribbons and lush billboards with nothing behind their facades.

We meet the woman destined to be Quang’s soul mate when Tong (a beaming Jennifer Ikeda) and her quarrelsome mother (Samantha Quan) arrive at the same refugee camp in Fort Chaffee, Arkansas, where Quang is stationed. A sunny environment of endless empty landscapes (suggested by Justin Townsend’s stark lighting and Jared Mezzocchi’s projections) greets the refugees when they find themselves assigned to bunk beds in army tents. There is nothing to do in these camps either, which probably explains why Tong invites Quang to his bed as soon as she lays eyes on him.

The love story unfolds as usual, although it is obvious that neither the playwright nor his director want to be seen as conventional. One downside are the songs, set to original music by Shane Rettig, but still stubbornly ordinary. The lyrics are anti-poetic in style and just repeat things we already know from the dialogue. But the music is the real flat note, written in a contemporary hip-hop idiom that seems totally inappropriate for 1975 and totally out of character for this refugee community.

Whatever rewritings Nguyen may have in mind for this piece, it would be wise to start by throwing the tunes.